ch
on the move worldwide since 2005

My doctor says I need glasses

In order to visit the wine-growing estates of the Robertson area, we chose Silwerstrand Resort as our basis for over a week.
Dirk and Live, www.worldtravellers.be, parked their Toyota FJ Cruiser with roof tent next to our lot. The two have been traveling the world since 2008. The afternoon and evening was spent with lively conversations and went by much too fast.

We met Babsi and Jörg two years ago, for the first time in Windhoek www.welterfahrung.com.  After a couple of nights at the camp fire our journeys parted once more. A sporadic e-mail contact was the result. This finally led to...

the meeting at the Berg River Resort close to Paarl. The comfy week-end was enhanced by some tastings in appealing vineyards. More than likely we will see each other in Windhoek end of April. We are looking forward to that.

Doris and Manfred have been travelling Africa for the last two and a half years in their travel mobile Bremach. We met them at the Blue Canoe Lodge in Tanzania. The second time we spend some convivial days at the Makuzi Beach Lodge in Malawi.
All good things come in threes. This time we got to spend some pleasurable days together at the Rondeberg Resort on a superb site between vine-grown mountains and the dam close to Clanwilliam.

Gangster hunt at the Table Mountain

Many grant vistas rewarded our drive of the Chapman’s Peak. Drive. We also travelled along the Ou Kaapse Road. After a bend, we were taken by surprise by a road block guarded by several police officers. The policemen were standing in bullet prove vests and with the safety off their firearms. It was obvious that they were looking for someone particular as we and other vehicles in front of us were waved passed. Shortly afterward we heard the sirene of the police from behind. A silver Golf GTI overtook us on the winding, very narrow and descending road. Closely followed by the police. Both of them took the next bend flying blind; breakneck passing manoeuvres, making use of the tiniest bit of space despite oncoming traffic.30 seconds later more sirens which belonged to two also dangerously overtaking, civil police SUV’s. For the remaining 5 kilometres we were expecting crashed vehicles behind every bend in the road. Luckily we were wrong.
We don’t know what the reason behind this extremely dangerous car chase was and we are unaware of its outcome. We simply hope that the robbers and the police game ended safely and that nobody got hurt. 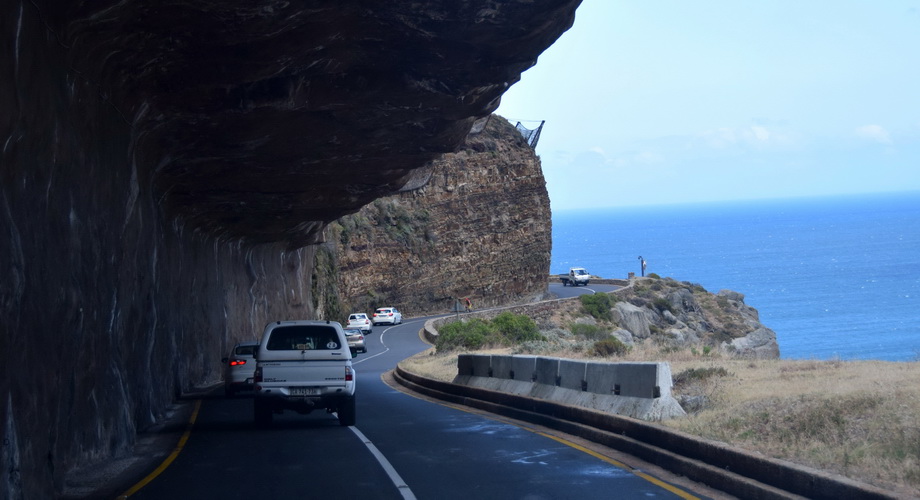 We camped in Springbok just before the border between South Africa and Namibia. We intended to make use of the available internet connection to update our HPs. Furthermore, we planned a day visit to the Goegap Nature Reserve. Throughout the afternoon, we enjoyed the absolute peace and quietness as we were the only guests
When from 5 pm more than 10 caravans arrived within minutes, we knew - SeaBridge on Tour. In the evening, mostly elderly teams of 20 vehicles met for the briefing. Contrary to South America where members of the own group fought about power outlets this group seemed more civilised. 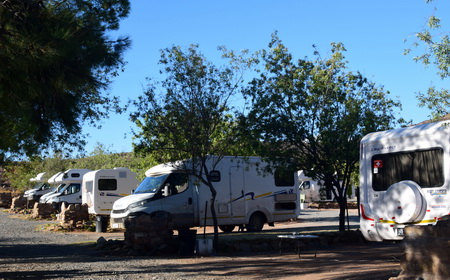 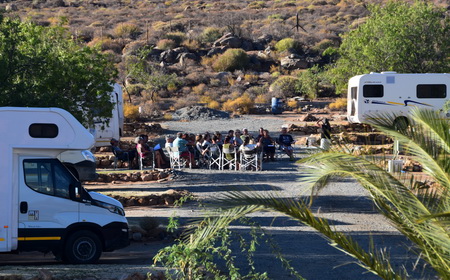 We know several, for us acceptable reasons to take part in one of these tours of this – not so cheap – organisation.
Nonetheless we are very thankful that none of the reasoning is relevant to us and we hope that we can continue travelling on our own for some time to come.

What happens to Crocs after they have been forgotten in the African sun for eight hours at 38 degrees? They have to be given away to smaller feet! 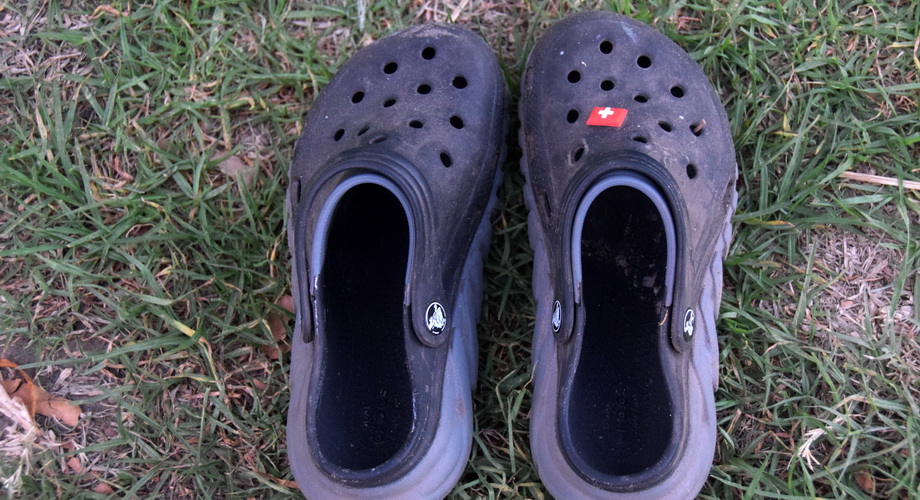 To avoid cleaning their barbeque grid after using it white South Africans simply through it into the open fire ten minutes before using it again. Rational and hygienic given that it does not smell too badly after not having been used for a longer time!

We unfortunately far too often meet people that are basically well off, but tend to be negative and to complain a lot.
Then we repeatedly have to think of the saying: One has to be able to comlain without having to suffer!