ch
on the move worldwide since 2005 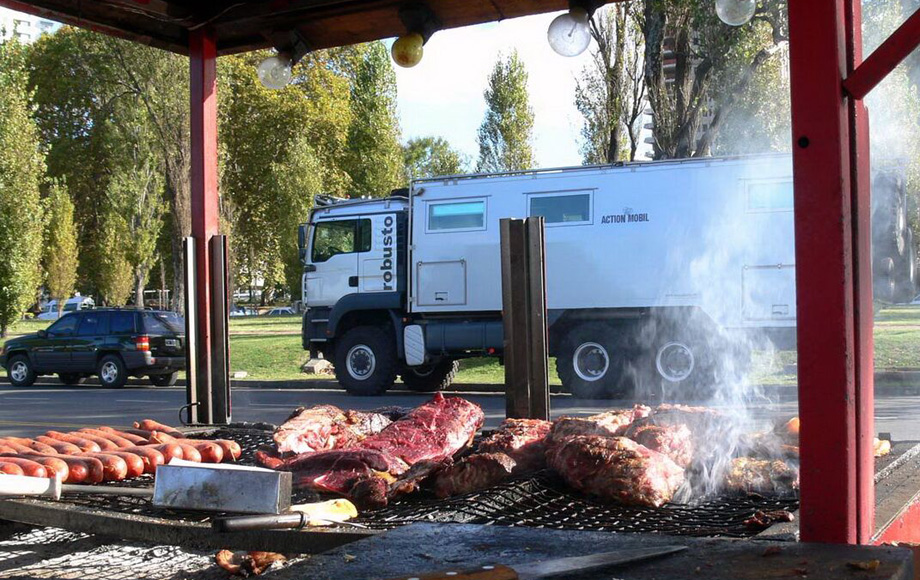 Immigration and customs duty with Action Mobil Robusto in Argentina

Clearing Argentinan customs and immigration with Robusto took 8 ½ hours. Without having been inspected by a customs official, we were allowed to drive our home out of the port area. However, getting all the necessary papers beforehand had proved quite an effort, but nevertheless much easier than in Africa. Nobody knew where the EMBA offices (EMBA = Emigración Marítima Buenos Aires) were located, and nobody wanted to or could fill in the form "La Salida Marina", even though this form is absolutely necessary for bringing the truck into the country. Persistance and a lot of patience finally made us successful in this matter!

"Why do you give more money than you have to pay?"

- this the question of dumbfounded restaurant owner, after we had added an appropriate tip to the amount of the bill.

With a special permit we were granted access to the office building and the agency on the 17th floor. The English-speaking agent would come in a bit later, we were told. 45 minutes after that we were informed that he had not yet come in, but were assured that he would be there in the afternoon. When we came back later, the so-called English-speaking agent was in fact there, but spoke only Spanish. It didn't matter. We got our insurance after the offered annual premium had been reduced by half.

On our search for water to fill our tank, we got to know some car washers. Our camping site for the next few days was right next to the "appartment" (a vehicle which was not really roadworthy) of one of these porteños. A warm and uncomplicated friendship developed out of it.

Rest at the comedor: We drank Coke, the sun was burning, approx. 25°C. School kids walked past us, wearing wooly hats and gloves - which, for us, means that we should be prepared to considerably higher temperatures.

We followed a hint given to us by an Argentine. The approach through a gorge revealed some adventurous aspects. We finally came to a place, where the track had gone and was therefore bridged with what seemed to be rather weak steel sheets. No wonder, the fotos taken by Brigitte came out blurred ...

After having registered with the Policía Municipal and the park authority, we were ready to drive up to an altitude of 4400 meters. The information that the track was in good condition and that only some parts had broken off, made us nevertheless prick up our ears. And we arranged for a search team looking for us, if we were not back by a certain time.

After a fantastic, wonderful drive with a view to the world's highest vulcano Pissis (6882 meters), we were stopped on our way back by policemen, who asked, whether it was possible to drive this road with our vehicle. We were somewhat surprised ...

A bang at an altitude of 3000 meters, just having passed a difficult stretch of road. Edy succeeded in keeping Robusto on track on the gravel road and brought it down to a stop out of a speed of some 70 kph. The left front left tire had gone, with a rip right through the thread. Changing a tire at this altitude took a bit longer than usual.

The big „Dogs not allowed" sign at the entrance of the hot spas at Fiambala was a foreboding. However, after a friendly conversation with the park ranger we only agreed upon an entrance fee, but did not mention dogs, and were thus able to enjoy our wonderful camping site with its great view for six days.

Huge natural stone basins with temperatures rising in 1-degree-steps from 36 to 45 degrees, a starry sky, bathing and splashing all on our own, satified with the new stage of our life ...

The camping site manager assured us that this region was very safe. They would not even lock their bicycles, because nobody would steal them anyway. And indeed, we did not see any locked-up bicycles.
In the church, many of the life-size saints were wearing genuine human hair. Looked somewhat unusual to us ... a bit like a catholic toupee advertisement.

a fruity, strong white wine that we tasted in different bodegas. We also found our favourite wine ... for CHF 4.50 (approx. USD 3.75) per bottle, from Finca Las Nubes.

A Kawasaki excursion into Quebrada Calchaqui

Edy enjoyed driving off-road through the río. On the way back, at the same place, we came across a Toyota. The car was stuck in the sandy river bed, totally in the water, with two Frenchmen sitting helplessly on the loading area. Since they hadn't been aware of the fact that, for off-road driving, the freewheel hub needs to be activated, and the car did not have any differential lock, any normal help was too late. A truck driver went to get a Kamazu (tracked vehicle). Even though the first try failed due to a broken rope, the Toyota was then lifted out of the water by the back and could be pulled out. Hoorray!

When we bought mineral water, we saw that the general merchandise shop did not only sell liquid stuff, but also straw for certain animals. The shop owner wanted to know, whether the Citizen, he had bought for CHF 25 (approx. USD 20) was worth its price.

In the mainly well equipped Internet cafés there are many children and adolescents. Unfortunately they engage almost exclusively in shooting games - war and action games, ad nauseam.

In Salta we consulted a clínica veterinaria to get medicine for Amigo. We had a consultation with a competent, young and attractive female veterinarian doctor. To say good-bye, she gave us a warm hug and kiss. Quite unimaginable at the Zurich University veterinary clinic, even though the female veterinarians are not without ...

We were sitting at our camping table at ten o'clock one night and watched our neighbour wash their rubber floor mats at the near-by faucet. All of a sudden, he disappeared into the ditch, but got up again quite quickly and walked back with only one shoe on. Helpful drinking buddies with fore-head torches went to look for the lost shoe and found it, while his wife saw to the damage in his "facial wallpaper".

The reason for that fall: He had been drinking with some travelling companions since two o'clock in the afternoon.

We have already met several people on their trip around the world and made new friends.